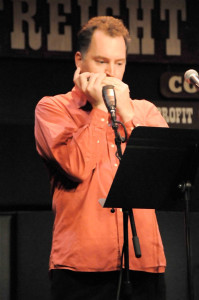 Damien Masterson, All Over the Map, 2009

Considered one of his finest albums, it showcases his compositional and arranging talents, as well his trademark harmonica and saxophone chops. A collaborative effort with Bassist/Producer Jon Evans of San Pablo Recorders, “All Over the Map” has been dubbed a “must have.”

Rock, Blues, Mustang Sally in Chinese…. an awesome display of Damien’s versatility as an arranger, composer and multi-instrumentalist. Currently available as download only.

Damien Masterson, Scrapbook, 2004
A collection of scraps, outtakes and previously unreleased material, offered as insight to what Damien has been up to in between his other releases.

Spacetime Continuum, Astral Werks, 1999
On the cutting edge of electronic music is Jonah Sharp, a.k.a. “Spacetime Continuum.” Damien is featured on tenor sax and chromatic harmonica. He has also performed live with Jonah, opening for Carl Craig, Todd Terry and Fatboy Slim.

Kitty Margolis, Madkat with a Twist, 1997
With the legendary Charles Brown, featuring Damien on “Wouldn’t It Be Loverly?”

Damien has performed solo and as a sideman at the following local venues and festivals, as well as a long list of international venues:

Affordable Lessons from a Pro. Learn from Damien Masterson today!